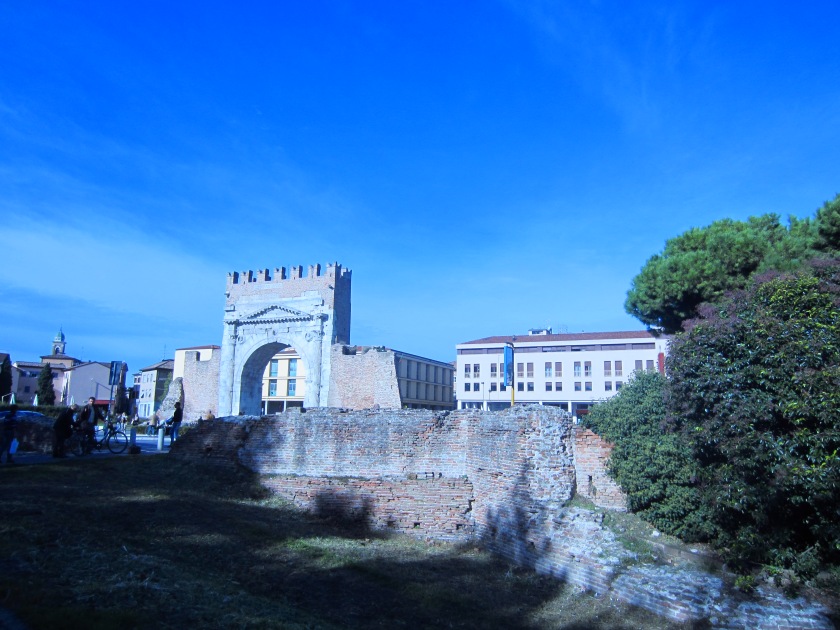 I went to Rimini last weekend with a few friends. It was quite nice. We walked around everywhere and saw a few churches and stores. I was almost mugged a gypsy women as I was walking into one of the churches, but as soon as she opened my jacket pocket I stepped into the church, and she disappeared. Definitely an interesting experience. We walked around through the parks and the city, and when I say we walked everywhere, I mean we walked everywhere! Wow. We walked for about 8 hours just taking things in. We went through the Saturday market, which was huge and I found a cute little Juventus jersey for my baby brother there that I couldn’t resist buying. Afterwards, we headed to the beach. Being that it is November in Northern Italy, it wasn’t a laying out and tanning beach trip. No, this beach trip consisted of sifting through thousands of whole shells, trying not to step on mollusks and clams, and witnessing a massive crab graveyard. There were probably hundreds of thousands of small crabs, just belly up on beach. It was low tide, but we assumed that there must have been a storm somewhere off shore. We finally found our way to Le Befane (the mall there) and indulged in some well deserved and needed McDonald’s. After a bit of window shopping and resisting buying everything in the mall, we headed back to the train station (about a forty minute fast paced walk), only to find out that our train was delayed 40 minutes. This news worried us since we had a specific bus that we had to catch once we got to Pesaro to get back to Urbino. We had already bought our tickets for the train, but decided to hop on another train headed toward Pesaro, because we could not miss that last bus. If need be we would just pay the extra fare on the train. When we got onto the train, we were lucky enough to find one of the Harry Potter like compartments and just relax for half an hour. The ticket guy did not come by at all so we were lucky. When got off of the train, we saw that he was just in the next compartment. It was close, but we made it! We were even a little early for the bus back to Urbino, which was great. All in all, the Rimini trip was long and exhausting, but it was a great day with some great people.