When I came to Urbino as an Erasmas student I knew that I would have some problems understanding people and that they would also have problems understanding me. My Italian was ok, but I haven’t been studying it for too long so, I was and still am nowhere near fluent in the language. I studied for 5 weeks in the South of Italy, a little town called Pisciotta that will forever hold a piece of me, and my Italian skills were increasing. I then traveled to Turkey with my boyfriend and stayed with his family. No one but my boyfriend spoke English, and I have yet to learn Turkish, so the language barrier there was quite a high wall to scale, but somehow we made it work with gestures and little words, and the help of my poor boyfriend who was always translating. I must admit though, that biggest language barrier I have come to know is not between English-Italian or English-Turkish, but actually between American English and British English.

There were a few girls from England studying with me in Urbino, but the one I was with the most (an everyday basis) was from Chesterfield, England. Aside from her accent, there were often words and phrases that she would use that I had never heard of and it was the same for her with things that I would say. One thing that really threw off was that she would aspirate her h’s where American’s typically do not.

I compiled a bit to compare the differences (I grew up in Northeastern Pennsylvania, but my parents were from Long Island, Brooklyn, and Central New York, and now I currently live in Long Island): 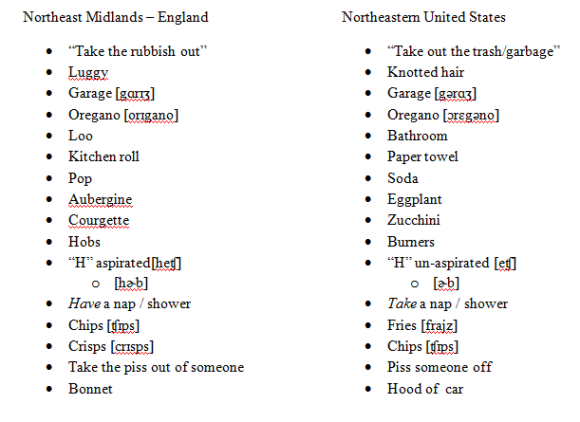 This is just the tip of the iceberg! We’d often be hanging out, cooking in the kitchen, and the two of us would have to repeatedly ask one another what one of us had just said. Sometimes it was our accents and other times we’d find ourselves having to go into explanations of what had just said so the other could understand. I wish we had had more time to sit down and compare the differences. Hopefully, I can go over to England at some point in the not too distant future. I know I’ll end up more interested in our speech differences than in the rest of the country…