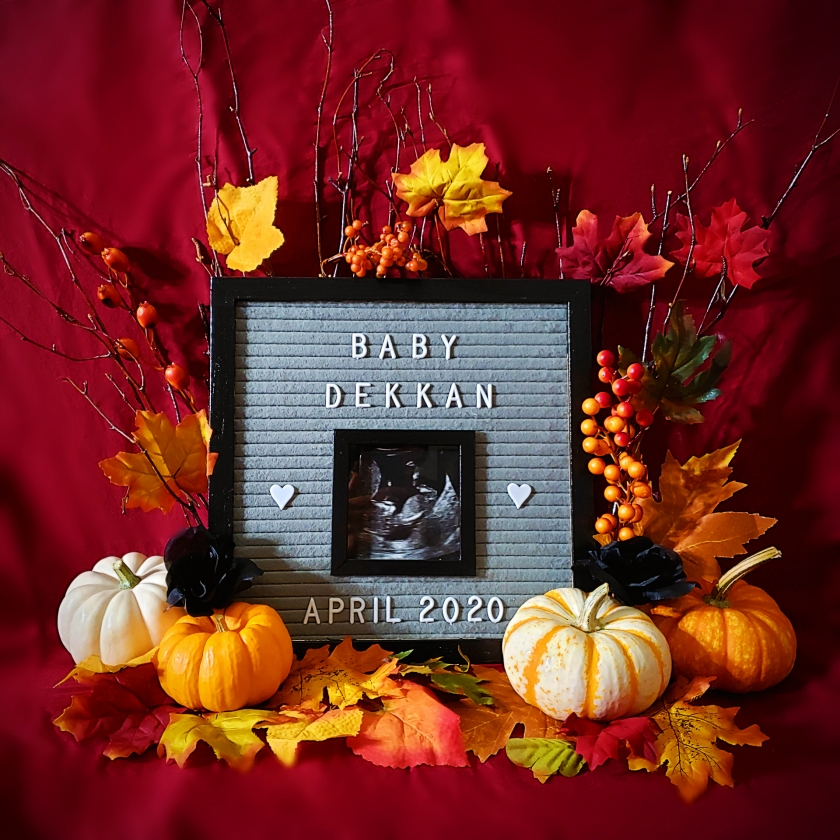 I found out I was pregnant on the first day of school this year. My mood had been slightly off, I was constantly hot, I was crying more than usual during commercials, and, my goodness, was I tired. I mean dead tired. I would pass out on the couch at 1 pm tired after doing not much at all. I was also about a week late, so that morning as I was preparing for school, I knew that I wouldn’t be able to wait until the weekend of even the end of the day; I had to test then. Normally, those little test strips take about five minutes to formulate a response, but it barely took thirty seconds for that second line to appear. I took another one after that just in case, and another one, and then just one more for good measure. I tried to contain my excitement and just go about my normal morning activities. I didn’t even tell my husband because I wanted to surprise him later that day when he got home from work. I went straight to Amazon and found some knock-off baby Chucks, a Guess What?  onesie, and  a We’re Pregnant book to surprise him when he came home that night. I was just glad that it was the first week of school which meant that the after school program that I normally work until six hadn’t started yet. If it had started there would be no way for me to prep his surprise. I also ordered my first set of prenatals. I had already been taking other supplements, but I wanted to be sure that all my bases were covered and that my little bean was getting what they needed to be getting. The first day of school is normally a whirlwind of a day to begin with and with this brand-new information I could barely get through the day. As soon as I got home, I grabbed the packages by my front door (can’t tell you how much I love Amazon’s Same-Day shipping) and prepped his surprise box. When he came home that day he just kept talking and it me a few minutes to get in a word to let him know that he got a little present today. I tried recording his reaction, but I somehow didn’t press the right button on my phone (I’m still upset about it). It took him a minute but his reaction was so sweet and he just kept repeating, “Really?” over and over in a high pitched voice. He even got all teary eyed. I think even now he’s still in a state of shock, but he’s still excited.

The next few weeks at school were interesting to say the least. My doctor’s appointment wasn’t until a few weeks later because I had to wait until I was around eight weeks. I just kept taking more tests to reassure myself (I can’t tell you how may test strips I went through…) and kept trying not to stress myself out at school – which, if you’re a teacher, you know is near impossible to do. It was a new school year, I was in a new grade level, with all new team members, and a new principal. The only things that weren’t new were my students since I had previously had them in third grade, which I think greatly helped out. The schedules were constantly changing, and we didn’t have a second of down time ether. During our planning periods, instead of getting to plan or prep for the day or week, we had meetings upon meetings upon meetings. Never ending meetings. All of this while keeping this new and exciting, yet still scary, secret. I’m a first-time mom, so of course I’m constantly worrying about everything in this pregnancy. I wouldn’t even let my husband tell his parents until after the first doctor’s appointment, and same thing went for me telling my best friend and my family. I wanted to make sure that it was real and that the little bean was actually in there and that all was good and healthy.

Luckily, I didn’t have too much morning sickness. I only ever got sick if I drank too quickly or too much on an empty stomach or if I left my toothbrush in my mouth too long or tried to brush my tongue (sorry kiddos, you’ll just have to deal with your teacher having stinky breath for a while; that’s why we have mouth wash and mints, right?) I was worried the kids would notice when I switched out my coffee for tea, and then for water, but luckily they’re too busy with their own fifth grade drama. They’re usually the first to notice or suggest things though. When I was working with them over the summer, a few of the girls were asking me when I was going to have a baby and that I should have a baby soon. I think they helped with the luck of this process, but they still have no idea. Each time I’ve gone to the doctor, I I get nervous they’ll start getting suspicious because I’m that teacher who is normally always at school. I mean always. Last year, I even had perfect attendance. I thought they’d start asking questions on this third visit, but they stopped when I told them that I just had to get my flu shot.

I honestly cannot wait to tell them. I know that they’ll be excited and I’ll finally be able to explain to them why I’ve just been extra grumpy this year. I haven’t put up with any drama since the year started. In a way, the surge of hormones has definitely helped with my classroom management this year which I know I needed to work on.

For my baby’s sake, I refuse to stress myself out over all the petty little things that happen at work and over all the constant changes. I just need to ride it out this year and make it until mid-April when my very own little munchkin will arrive. For now, I’ll prepare my fifth grade not-munchkins anymore for their state exams and middle school.

I’ll be back in a few more weeks with a second trimester bump-date to keep you all informed!