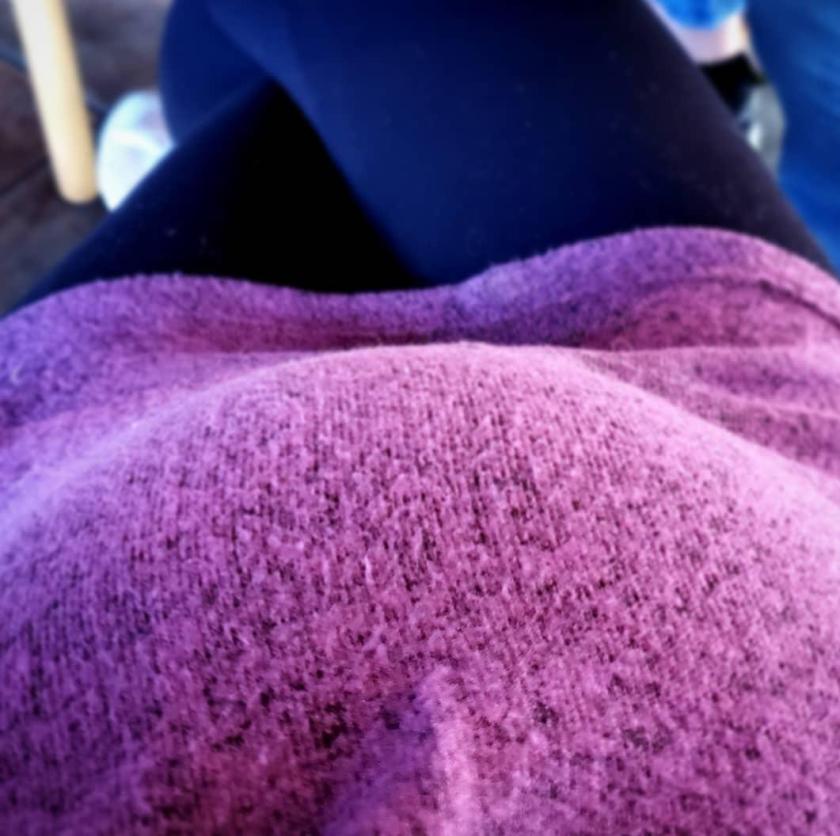 Now that I’m just hitting 20 weeks (cue Bon Jovi, “Wooooah we’re halfway there….”) , I’ve noticed that there a few things that I cannot do or that I struggle to do. My bump may still be little, but she is sure changing how I move and go about my day.

-Bending over / down: Oh my, goodness! You never realize how often you have to bend to do something until you’re pregnant. Bending to pick stuff up, bending to do laundry, bending to feed the cats, or clean up something on the floor, bending to pick up my bag, or vacuum. I’ve since learned that I must squat instead, but I still haven’t gotten in the habit of doing it. It’s like I can feel her there and if I bend, I feel like I’m squishing her and it’s just uncomfortable. This is driving me nuts when I’m sitting, leaning over, as well as, of course, trying to put on my shoes – a task that I deem will be impossible in a few months..

-Walk: Ok, ok, I can walk, but not like I used to be able to. I’m constantly out of breath and it’s driving me nuts. Whenever I go for walks after work (or to work) or on the weekends, I am constantly out of breath. I find myself having to slow down, pause for a bit, then continue. Talk about frustrating. The doctor did tell me that my lung capacity would go down as I grew this munchkin in my belly but talk about frustrating.

-Stand for a longer period: This is honestly so annoying and is making me seem like the laziest teacher ever! I should be up on my feet more often, but even after only five minutes of standing up, teaching, just being on my feet at all, the only thing that I feel like doing is sitting down. I have sat down so much this year that my kids probably think that my bottom is glued to my seat (I wish theirs were). I’m glad that I still walk to and from work still because otherwise I’d barely get any steps in.

-Deal with whining or anything of the sort: My mood the past couple months has definitely made me less tolerant of my students’ or anyone’s whining, pettiness, drama, etc. I shut it down the second it happens in the classroom. I swear the kids think I’m the meanest teacher this year. I just don’t have the time for it, nor do I want to deal with any added stress.

-Handle emotions: Everything at this point makes me want to cry. I normally cry at the drop of a pin, but it’s worse now if that’s possible. Not even just at sad things in movies or shows; anything that’s emotional, I’ll cry. The other day, one of my student’s parents brought in her newborn when she was picking up her son, and I had to hold back tears because the baby was so cute. I actually had to walk away. Talk about having my hormones in overdrive right now.

-Stop eating: This second trimester, I have not been able to stop eating. I’ll eat a bagel in the morning for breakfast, whatever my main lunch is plus a about four other snacks, then I grab a snack when the kids are snacking during the after school program, I’ll eat a big dinner when I go home, and even after that I’m not done, because I’ll be hungry again in hour so I end up eating some more things; usually I’ll have fruit, cheese, or pickles…. Or a combination of everything else. I haven’t had any particular cravings for anything weird yet, but once I get something in my mind that I feel like having or that I want to have, I need to have it, and I won’t be satisfied until I eat it. I’ve only gained a couple of pounds so far though, so we’ll see what happens. My stomach is definitely rounder, but not enough that my students can tell that I’m pregnant yet (I’ll probably tell them after Thanksgiving break); they probably think that I’ve just gained a few pounds from all the bagels that I’ve been eating. That’s been me my whole life though; I’ve always had a fast metabolism so now with that plus the baby sucking in all my calories, I’m just in a constant state of hunger.

What are some things that you noticed you couldn’t stand or couldn’t do anymore while you were pregnant? Anything that pertained to your job? How long did it last and how much of an inconvenience was it?